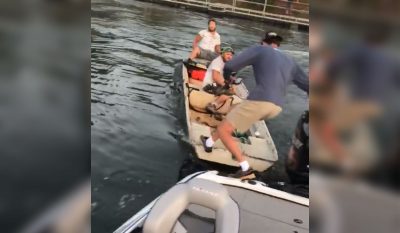 If morons harassing anglers and other folks enjoying the outdoors gets you riled up, wait until you see what happened to two teenagers at Fort Cobb Lake out in Oklahoma.

The two teens are actually teammates who fish on the Southwestern Oklahoma State University bass fishing team. They came to the lake for some practice and to scout for potential bass holes, but left with thousands of dollars in damage to their boat.

“I couldn’t really believe it was going on. It was crazy, really,” said Jacob Russell, whose boat was rammed.

Russell said he and his teammate, Jacob McClendon were fishing near Sunset Cove Marina in Oklahoma when a man started harassing them, telling them to fish somewhere else, and throwing screws at their boat.

“They were trying to act like they owned a perimeter around the whole marina, within 150 feet of it. But it’s a public lake and we weren’t touching their docks,” Russell claims.

Not long after the man throwing screws disappeared, he showed up again with another man, in his own boat, and started bashing the teens’ boat.

Below is the video authorities have been looking at as the investigation and search for these vandals continues. Keep in mind tensions are high and the situation escalates quickly, so some colorful language is used.

Here’s what led up to everything. Me and @jacobleemac went to fish the marina at the lake. And a guy told us to fish on the other side of the marina because they had been seeing fish. Right after that a man on the roof says that there is no fishing within 150 feet of the marina. I politely told him that we are allowed to fish as long as we don’t touch his docks. He started calling us ignorant and was getting mad so we told him we would go farther away because there was a sign that said no fishing within 150 feet. But that was one sign and we were further than 150 feet from the sign. So we went 4 slips down and away from them. About 2 minutes later a guy comes and starts throwing the screws that they were using to hang the sheet metal with. He left when he was out of screws and we figured he was done. 1 minute later he comes back with the John boat and you saw what happens there. He rams us into the dock breaking the trolling motor, the outboard fiberglass, and cracking the hull of the boat, and breaking a rod tip. We left and called the police and filed a report. Currently waiting for the investigators to figure everything out. Big shout out to @zackbirgefishing for getting this story out there. Helped a lot in learning about the guys involved. Oklahoma highway patrol is doing their best to make it right. Thank god no one was seriously hurt and it’s just a boat that can be repaired. Hopefully this clears up all the comments asking about what lead to all of this. I pray justice will be served. And people realize you can’t treat fisherman this way. Thanks to everyone for all the support.

This footage shows the moment it all began, with screws pelting the angler’s boat:


According to KFOR, the marina in Oklahoma where this attack took place posted this statement on Facebook:


“Regarding the events that took place Tuesday evening 8/27/2019. The Park Ranger, Oklahoma Highway Patrol, Caddo County Sherriff Department, and Oklahoma Game Wardens are aware of the situation and began an investigation immediately following the incident. There were no Sunset Cove Marina or Fort Cobb State Park employees involved in the incident. All involved were immediately interviewed and all eyewitnesses statements were taken (of the entire situation that occurred). We have contacted customers who have boats in our slips to please come and inspect their vessels for any damage the two individuals fishing caused prior to the video. Contact the State Park Ranger in regards to any reports of damage so that he can get his reports to the D.A.”
​
We haven’t heard an update, but the SWOSU freshmen anglers reportedly filed a police report with Oklahoma authorities following the incident. OHP said the investigation is currently ongoing.