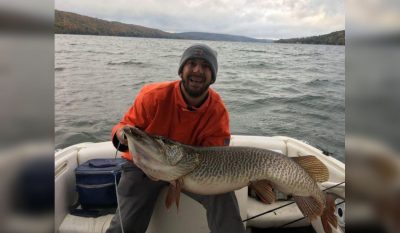 Immediately after landing the monster tiger muskie, angler Demetrio Ascioti began jumping with joy on his fishing boat. But he didn’t have a scale to weigh the fish..

Demetrio was fishing Otisco Lake on October 12 when the weather began taking a turn for the worse. There was mist in the air and the clouds were suggesting heavy rain was on the way. Ascioti, along with his buddy, Todd Woytan, had been tossing lures for a while before deciding to switch things up and try a different approach – utilizing the strong winds to troll for bites.

Ascioti steered his boat to the middle of the lake, and cut the engine.

“I just threw out my Storm black and white stickbait that I use for salmon fishing,” Ascioti said.


While the two anglers were drifting across the lake, Ascioti’s rod suddenly bent downward, making him think he was snagged on the bottom. And then the fish shook his head on the other side of the line.

“I said, ‘Oh my God, there’s something on here!'” Ascioti recalled according to Penn Live.

Woytan, without hesitation, jumped into action clearing the deck and grabbed Ascioti’s fishing net – and discovered they might have a bit of an issue..

“When I saw its head, I initially thought he was going to lose it. I could see there was only one hook from the treble hook on the lure in the fish’s mouth. I was sprawled out across the back of his motor and was in danger of falling into the water head first,” Woytan said. But that wasn’t the end of this dramatic catch. “When I got the fish into the net, the freakin’ net handle almost broke! But we got her in.”

“It was insane, breath-taking, the fish of a lifetime. It was the size of a shark,” claimed Ascioti when describing the fish that, in all likelihood, would have been a new state record.

See, New York Department of Environmental Conservation determines its state records by weight, and the standing state record for muskie weighed 35 pounds, 8 ounces. It was caught in 1990 on the Tioughnioga River by Brett Gofgosky, and also measured 50 inches in length, according to the DEC website.

Unfortunately, Ascioti said he didn’t have a scale on board with him at the time of his catch.

“All I know is my dog weighs 34 pounds and this fish was significantly heavier. I was resting it on my knee in one picture, and when I stood up (for another picture) I was grunting to hold it,” he said.

When asked if he’s been able to sleep after releasing the massive fish, Ascioti said, “Look, I wasn’t going to it. I love these fish. I have no regrets.”

Good for you, sir. And what a fantastic catch! At least he was able to snap some photos of the fish so he can look back and remember for himself one day down the road.

The post Monster Tiger Muskie Caught in New York Likely Could Have Been a State Record appeared first on OutdoorHub.